Fast, light and central are the adjectives with which the Mondi Group describes ECO7, its Valmet*-supplied lightweight recycled containerboard line PM 7 in Świecie, Poland.

The recent investments have enabled Mondi to minimize its carbon footprint substantially. For example, CO2 emissions have been reduced by more than 100,000 tpy, in addition to the 400,000 tpy already reduced earlier. Despite the increase in paper production, this translates into a CO2 emission reduction of over 60%.

OptiReel Plus reel enables the mill to produce jumbo reels with a weight of 100 tons and a diameter of 4.6 meters. The production capacity of 470,000 tpy is handled by one single winder, the WinDrum Pro. The robust and utmost reliable winder design combines all the latest advanced winding features, such as automatic splicing, knifeadjusting, set changing and core loading. The whole production line is controlled by a MetsoDNA DCS/QCS system. According to Raniszewski, it offers very reliable and helpful diagnostic tools that make problem-solving much easier and faster than with their other machines.

Continuing cooperation – from project to another

“Valmet was selected to deliver the new line because they offered a technically advanced and proven concept at a competitive price. Our positive experience during the previous project also influenced the decision in favor of Valmet,” points out Project Manager Maciej Janeczek, referring to a rebuild project in which Valmet converted Świecie’s sack paper machine PM 1 for two-ply kraftliner. Valmet's Project Manager Juha Hentunen on the right. 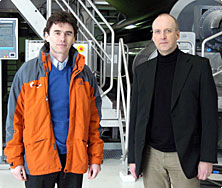 “We started to produce marketable quality within a few days. The paper quality was according to the standard accepted by our customers. A series of tests on corrugators also confirmed good runnability and strength of board in view of ECT and FCT. With the papers produced by ECO7, our customers can run their corrugators at maximum speed and efficiency,” says Technical & Marketing Service Manager Marek Motylewski.

“The most important technological factors are ‘hidden’ in every section of the production line,” reveals PM 7 Line Manager Robert Raniszewski.