Stora Enso's Imatra Mills in Finland consist of two production units: Kaukopää and Tainionkoski, 250km east of Helsinki, on the southern shore of Lake Saimaa. Together, they employ approximately 1,000 people and produce one million tonnes of board and paper annually.

More than 90 per cent of production is exported, mostly to countries in Europe, but a substantial share is also exported to Southeast Asia. Pulp production has a long history at Kaukopää with the first pulp mill commencing production in 1935. Fiber line 2, started in 1976, was modernized and converted to softwood production in 2001, since then it has been a very good reference for Valmet’s Cormec, Polarox, and Kappa Analyzers that provide critical measurement data for the control of bleaching. In the latest advance at the Kaukopää mill, Valmet has introduced its latest concept in the form of stabilizing controls for the entire bleach line. Based on the newly introduced Kappa QC analyzer, the development of Kappa and brightness on fiber line 2 is now tightly controlled by embedded bleaching stage controls achieve Stora Enso’s quality targets and keep both bleaching process and chemical costs under control.

Valmet Kappa QC is a new analyzer concept that not only measures pulp lignin content, brightness and fiber properties, but also utilizes decades of know-how in combining Valmet’s online and inline measurements to stabilize control of the entire fiber line. The controls, now embedded in the Kappa QC analyzer, provide external setpoints to the chemical dosage controllers using easily understood function blocks to perform filtering and calculations. The basic controller uses a Kappa factor control modified with predictive feedback taking Kappa/brightness and COD (Chemical Oxygen Demand) into account. Measurement data from the analyzer plus inline sensors are combined with settings given by the operator to carry out the various calculations required for each of the process stages and provide setpoints for the chemical controllers.

One of the objectives for the new embedded control concept was to remove the ‘black box’ reputation of bleaching controls and make fiber line stabilization easier to understand and implement for pulp mill staff. According to Anna Pesonen, Mill Development Engineer, this objective has been met and comments that, “Since the start of the project in September 2014 we have been able to learn a lot about the controls and now have a good understanding of how they work.” Marko Harinen, Specialist at Stora Enso’s Pulp Competence Centre also located in Imatra agrees, “As a pilot project, I think it went rather well. Valmet’s training in the use of the control, principles and tuning parameters was quite good. It is a very open system, complex but easier to understand.” 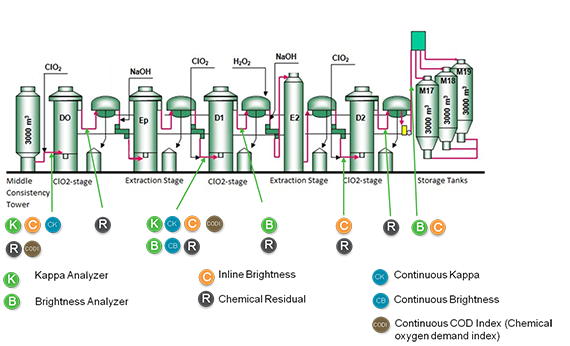 The bleaching sequence at Kaukopää is a 5 stage ECF (Elementary Chlorine Free) process (Figure 1) preceded by oxygen delignification. The embedded controls are broken down into function blocks within the system with dedicated table displays to provide a user-friendly interface for the operators. For each controlled stage, O2, D0, D1 and D2, the operator only has to give a setpoint for the primary chemical dosage controller. For different raw materials, operating targets or grades, control parameterization for each operation mode can be saved to different recipes to provide a flexible transition between operation modes. The O2-stage utilizes a new non-linear Kappa Factor calculation based on Kappa measurements before and after the stage, resulting in a much lower Kappa variation to bleaching (Figure 2). 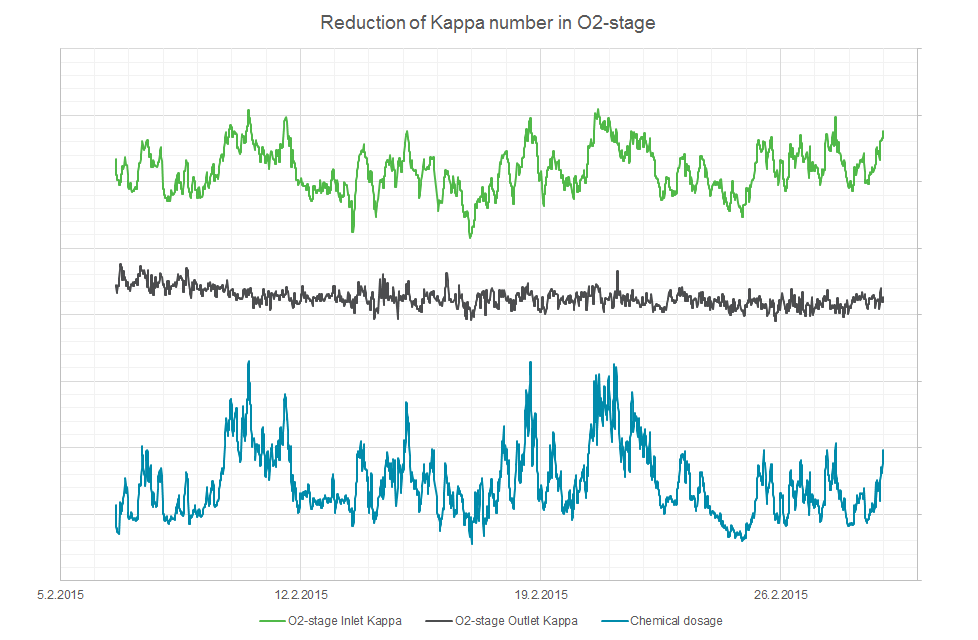 A combination of Kappa factor control together with predictive feedback correction is used in the D0 stage to adjust the chemical dosage more precisely by applying a relatively higher chemical dosage for a higher Kappa number or a smaller dosage for a lower Kappa. The amount of chemical is determined by a Kappa factor table in the current active recipe as well as other parameters needed for control. The predictive feedback control is basically an automatic operator bias, correcting the chemical dosage according to the kappa or brightness target and the actual achieved kappa or brightness value.

A special feature of the control, used in the D0 stage, is washing loss compensation using the Chemical Oxygen Demand index (COD) calculated from Polarox and Cormec measuring changes in chemical and kappa/brightness immediately after the chemical dosage point. Some of the chlorine dioxide dosage is consumed to neutralize the washing loss from the previous stage and the short feedback of the COD index takes this into account. “The use of COD is was especially interesting in this project, feedback controls have not been traditionally used and it has been very good that we have been able to keep them enabled and get the additional benefits from them,” comments Marko Harinen.

Figure 3. Final brightness variation is at a good level.

For Anna Pesonen the project has been very worthwhile, “The cooperation with Valmet has been very good; I think we have built a very good basis for better upper level controls,” she says. The results so far have been good, with the reduction in final brightness variation meeting expectations (Figure 3). Marko Harinen sees a bright future, “We have been quite conservative with the operation so far and as we become more familiar with system I see the opportunity to improve even further. These controls are additional tools and results always depend on how you use them,” he concludes.

Valmet Fiberline Analyzer measures kappa, pulp lignin, brightness, HexA and fiber properties. It is the only pulp quality analyzer for the entire fiberline.

We in Valmet believe that analyzers and measurements are the key cornerstones for successful process controls and optimization. We offer a wide portfolio of analyzers for different pulping and papermaking process needs.

The accurate online measurement of Kappa number, indicating residual lignin content, is essential for the optimization of cooking and bleaching in the production of eucalyptus kraft pulp.

Visy Tumut is an integrated pulp and paper mill with a kraft pulp mill and two board machines. To ensure the highest pulp quality, more accurate and reliable Kappa numbers are needed as feedback on how well their continuous digester meets the set pulp quality targets.