Kuopion Energia Oy chose Valmet’s new FuelDiet KCI Corrosion solution to enable to use more bio based fuel without increasing the possibility of superheater corrosion in its biomass fuel firing boiler at Haapaniemi 3 power plant. Kuopio Energia produces district heat for the residents of the city of Kuopio in the eastern Finland and in winter times the production reliability is in high priority.

Kuopion Energia produces heat and electricity with two power plants (2 and 3) in eastern Finland. Main fuels are peat, woodchips and other bio based fuels. Bio based fuels are about 50 % of the fuel consumption. Power plants produced 392 GWh electricity and 923 GWh heat in 2013. Haapaniemi 3 power plant with Valmet boiler started up at 2011 and at the summer 2013 they took FuelDiet corrosion control solution in to use.

‘FuelDiet gives us the possibility to use more bio based fuels’

Production Director Peter Seppälä from Kuopion Energia tells us why they need Fuel Diet: ‘The ratio of sulfur and chlorine in the combustion gases is in critical place when speaking of the superheater corrosion. The smaller the ratio is the more likely the hot combustion gases will cause rapid corrosion. On the other hand, the more bio based fuels are in the fuel mix the lower goes the sulfur amount and the ratio will go down. FuelDiet offers us real time measurement of sulfur/chlorine ratio and a way to control it.’

In Kuopio Energia the Fuel Diet solution consists of software platform for data analyses and decisions making, sensors to gather information of the process atmosphere and measurements to control the harmful phenomena.
Heat production volume in Haapaniemi power plants changes throughout the year from summer time’s minimum of 30 MW to winter’s high peak of 250 MW. In summer time the whole production is made with Haapaniemi 3 power boiler. Due to wood based fuel delivery agreements and the lower price of the wood compared to peat, they want to produce summer production with only bio based fuels and also to increase biofuel ratio in the yearly production.

‘Before the FuelDiet solution we had to burn at least 30 % of peat in the fuel mix to be on the safe side to not to cause corrosion. Now we can use 100 % of biomass and get real time measurement of sulfur/chlorine ratio and hence we can react immediately if the ratio goes too low. We also get the information if for some reason the composition of the fuel changes. That gives us information about the quality of the fuel from different suppliers’ says Peter Seppälä. ‘With the possibility to use more cheaper biofuels the payback time of the FuelDiet is around 1 year. The FuelDiet corrosion control system is very useful for us’, continues Production Director Seppälä. 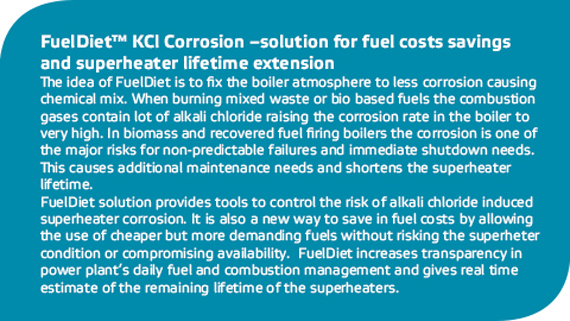