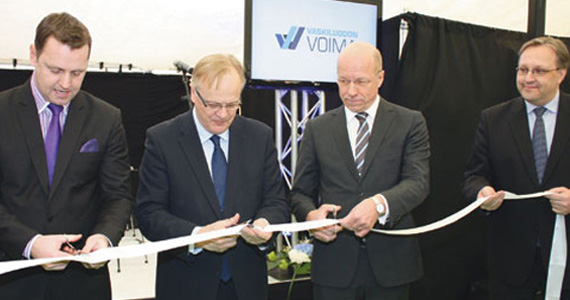 The plant is ground-breaking in many ways, particularly as this is the first time anywhere in the world that biomass gasification is being adopted on such a large scale for the replacement of fossil fuels.

“Vaskiluodon Voima made a coal-fired plant go green, and for this reason will set an example for others to follow in the future,” explained Jyrki Holmala, President of Valmet's Pulp and Energy business line.

Close to half of the coal used by the plant can be replaced with gasified biomass. This means the solution is highly environmentally friendly, it also enables the flexible use of different fuels and significantly extends the life of the current power plant.

“We now use three to six kilos less coal per second in our production than earlier. This means having one coal shipment less per month,” explains Matti Loukonen, Power Plant Manager of Vaskiluodon Voima.

Loukonen is happy that the project is now finally completed and everything went according to plan. Special thanks must go toValmet's work safety culture. “Although at some point there were about 200 people working on the site, there was only one incident reported—and that was a strain injury!” Contact usValmet locations Contact form Related articles Fuel conversion for power boilers: Vaskiluodon Voima Oy, Vaasa, Finland